Dr. Haley received her Master’s Degree in The Science of Oriental Medicine from the prestigious Southwest Acupuncture College in Santa Fe, New Mexico graduating at the top of her class. As part of her clinical training, Dr. Haley practiced at an integrative medical setting at the Santa Fe Indian Hospital, where she specialized in arthritis, back pain, allergies, and diabetes. Dr. Haley’s other clinical expertise includes woman’s health from her time working at the Santa Fe Woman’s Center and the gynecology department of the Heilong Integrative University Hospital in Harbin, China. During her time in China, Dr. Haley also worked with the cancer and post-stroke patients, as well as other neurology patients.

Post-graduation, Dr. Haley started her own business and private practice in Santa Fe, New Mexico. She worked extensively with patients suffering from psycho-emotional disorders, anxiety, depression, and addiction. Dr. Haley’s background as a Division 1, Varsity athlete contributed to her successful strategy working with student-athletes on sports-related psychologically, competitive performance, and nutritional aspects for their athletic training. Dr. Haley’s passion for athletics and physical fitness continued to serve her as she worked as the resident acupuncturist at the prominent El Gancho Racquet and Fitness Club in Santa Fe, New Mexico. She had success treating joint and back pain, tendonitis, and metabolic disorders aiding in weight-loss programs, prior to her working as the acupuncturist on Princess Cruise Lines for the last 5 years.

Her experience has given her the opportunity to treat patients all over the world and globally study health and wellness strategies. Dr. Haley feels extremely fortunate to be able to have changed the lives of her patients by relieving them of their health concerns within the short duration of just one cruise. Her method of treatment encouraged the body to jump-start its own natural healing processes for a better quality of life. Her patients’ conditions have ranged from pain conditions such as sciatic pain, back pain, joint injuries, and arthritis to terminal cancer pain, post-stroke paraplegia, weight-loss, digestive disorders, and facial rejuvenation.

Dr. Haley is thrilled to join the team here at the Chiropractic Family Health Centre while she is pursuing her specialty in sports medicine acupuncture and continuing her certification as a Natural Health Practitioner.

A complimentary consultation with Dr. Haley is available so you may discover how this effective, time-tested medicine can bring long-lasting relief from your health concerns.

Dr. Curtis C. Margerum, D.C. was born in Mayville, ND. He grew up in Minnesota and was active in football, basketball, baseball and track in high school. He also participated in choir, band and drama. He went on to play baseball at both Moorhead State University and the University of North Dakota. From there he attended Northwestern College of Chiropractic in Bloomington, MN graduating in 1990.

He has been in practice for the last 26 years in Alexandria, Virginia and loving every minute of it. He has helped countless number of patients through the years. He has skills in many chiropractic techniques including Diversified, Activator, Thompson Drop and Cox Flexion Distraction.

He recently joined the Palmercare Chiropractic group which serves Northern Virginia in eight different locations. He is constantly attending seminars and meetings to continue to better himself for the benefit of his patients. His main goal is to provide the chiropractic experience which is above and beyond the patients’ expectations. 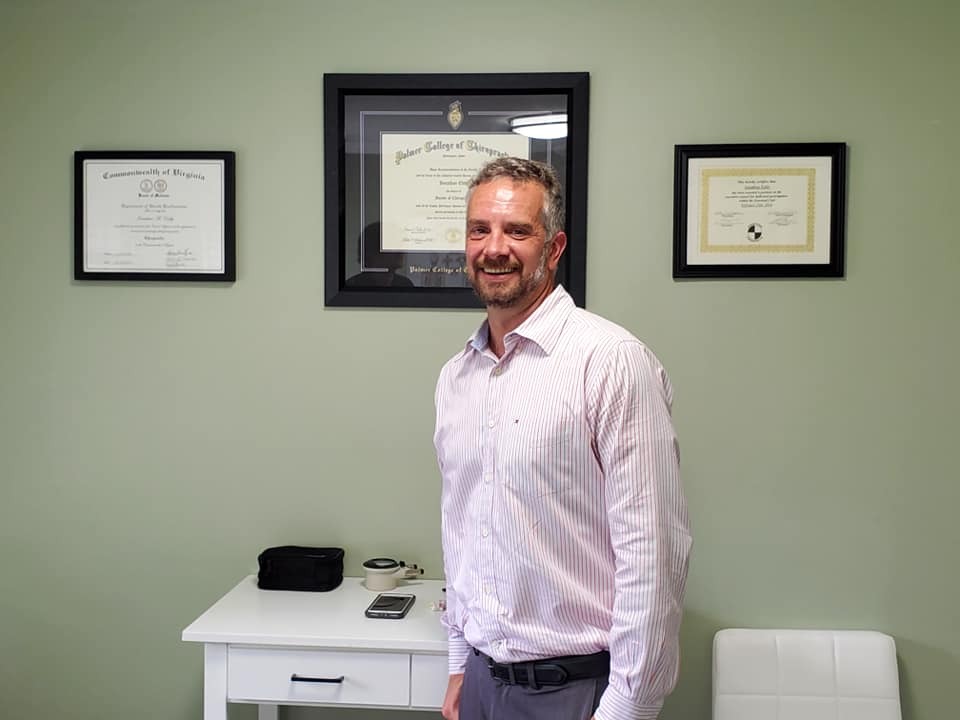 Hey everyone! My name is Dr Jonathan Eddy, a CHIROPRACTOR. Here’s a little bit about me...I was born in the state of Vermont: the home of farms, skiing resorts, and just an all around great hometown feel! So naturally, growing up I spent a lot of time outdoors, playing sports, on the slopes, and  A LOT of hard work on a horse farm.

My father was a musician and one day when he was loading his equipment, his back went out. He had a very difficult time standing, sitting, moving, and yep you guessed it...playing music! He tried everything...icing, over the counter medication, prescription medication, and the pain persisted. Thankfully, after a friend watched him suffer for too long, he suggested that my father see a Chiropractor. Chiropractic had an almost immediate effect on my father...back pain gone, playing music back! Chiropractic had such a life-restoring impact on my father that he decided to change careers determined to be able to have that same life-restoring impact on people.

While my father was practicing, I was working in the construction field. It was a hard-laborious job, but it allowed me to work with my hands which seemed like a good fit at the time. After witnessing the daily miracles at my father’s Chiropractic clinic, and more importantly seeing how much joy my father had in helping others, I too decided to change careers and began my chiropractic journey.

Even though my father’s introduction to chiropractic was back pain, I spent enough time around his clinic to fully understand the power of chiropractic. He had patients experience great improvements in things like allergies, digestion, energy levels, focus, breathing difficulties, hormones, ADHD, acid-reflux, and countless others!! He shared with me the true power of chiropractic and because of that, I knew I wanted to go to where it all started, the fountainhead, the birthplace of chiropractic, Palmer College of Chiropractic in Davenport, IA.

Another reason I chose Palmer College of Chiropractic in Davenport, IA was the specific technique I knew I wanted to master, the Gonstead technique. The Gonstead technique begins with the body's structural foundation and believes that maximum balance and stability in the spinal column may be achieved when the pelvis, vertebrae, and legs are level. Doctor’s interested in mastering this technique, like myself, go to the The Gonstead Clinic in Mt. Horeb, Wisconsin.

Upon completing school I started practicing with my father in 2017 in Charlottsville, Va. I can honestly say that it was everything I had hoped for... getting to know patients, being part of their lives, spending time with my father, and most importantly... witnessing “miracles”. You see, most people would call them miracles, but us...we know what happens when the body functions the way it is designed and your nervous system is free of interference. So while we never get tired of seeing people’s health drastically improve with chiropractic care, we aren’t surprised.

I relocated to Fairfax City in 2020 and am so incredibly excited to be a part of Palmercare Chiropractic and the Fairfax City Community. I look forward to meeting you soon! 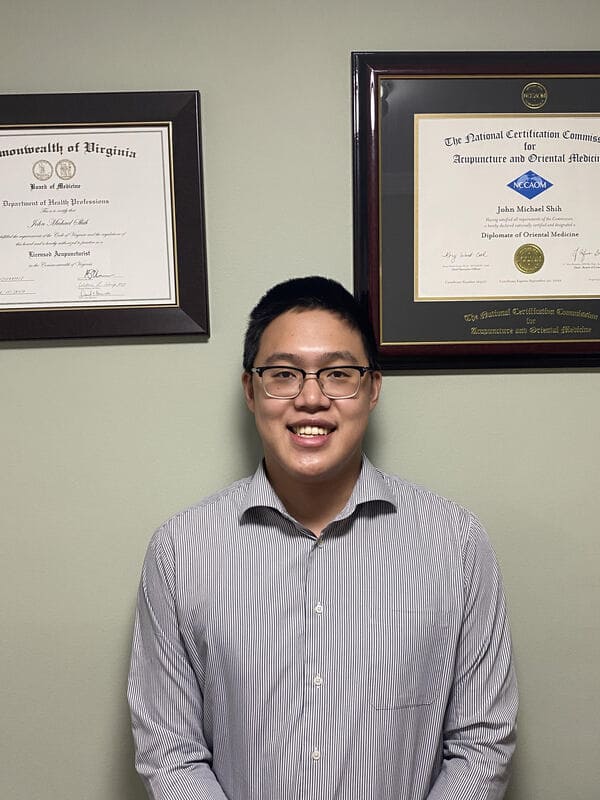 John Michael Shih is a licensed acupuncturist, board-certified acupuncturist, and clinical herbalist issued by The National Certification Commission for Acupuncture and Oriental Medicine (NCCAOM) in both Virginia and Maryland. He is also a licensed Chinese medical physician in China. He completed a 5 years Bachelor’s program in Chinese Medicine along with 3 years of Master’s degree in Nanjing University of Chinese Medicine which is one of China's best and pioneer Chinese medicine universities. He spent over 8 years receiving training in acupuncture, Chinese herbal medicine, and western medicine. He also completed his residency at the Jiangsu Province Hospital and Qinhuai Nanjing District Hospital. Besides clinical practice, he was an adjunct professor at the Virginia University of Oriental Medicine in 2018 and a lecturer at the School of Pharmacy at Management & Science University of Malaysia in 2020.  Over 9 years of clinical practice in Acupuncture and Chinese Herbal Medicine in both the United States and China, has led him to be exposed to treating a variety of health problems.

John was born in Windham, Connecticut, and raised in Taipei, Taiwan. His diverse cultural background and years of clinical experiences have led him to believe in the beauty of integrated healthcare. The use of a holistic approach by combining western and eastern treatment options can round out those regimens restoring harmony and helping the body's healing process. He observed people's struggles with illness and pain and as a result of Chinese Medicine achieved individual health, happiness, balance, and well-being.  These life experiences motivated him to help patients to feel their best, emotionally, physically, and spiritually.  Outside of the clinic, John enjoys photography, traveling, and cooking.

We want you to live a great experience with us, so let us know what are you interested in and we will give you the best help!

Thank you! Your submission has been received!
Oops! Something went wrong while submitting the form.

Here at Palmercare Chiropractic we do our best to not only get you healthy but keep you healthy! Chiropractic care is one of the most important aspects of healthcare in order to achieve optimal health. Chiropractic care is based off the concept of eliminating misalignment and nerve interference of the spine.
As a Chiropractors we focus and work on your nervous system removing subluxations, getting the nerves turned on and firing so your body is able to heal itself as it should and perform at optimal levels!

Chiropractic care is so much more than a quick fix for neck and back pain. Babies and children struggling with bedwetting, colic, ear infections, and feeding issues can find relief with chiropractic care too! Find out more about what we can do to help your little one by contacting Palmercare chiropracter today!